Surrounded by famous Eastern Ghats, geography of Koraput is mainly characterized by undulating terrains, which are dotted by lush green mountains, hilly areas, streams, waterfalls and plain land areas. Below you’ll find more detailed information about geography of entire Koraput region, which includes information about its reservoir of minerals, soils and main rivers that flow through this region. Besides, detailed information about forest areas and lush greenery that cover huge land mass of Koraput region has also been included in below paragraph. 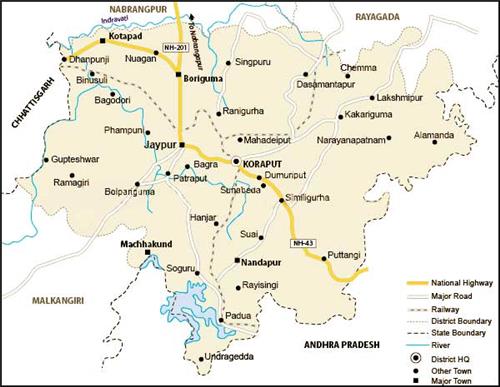 The famous Eastern Ghats with its hilly and mountainous areas obviously take up large part in this undulating terrain. Eastern Ghats mainly has presence in the border areas of the district, especially in the border areas near Bastar District in western parts and in border areas of Vishakhapatnam District located in southern part. Eastern Ghats has very moderate presence in and around the main city of Koraput, but their influence on city’s climatic condition is but obviously immense. When we are talking about Koraput’s topography, then invariably mention of its innumerable beautiful waterfalls and streams is very natural. All these waterfalls and streams are actually extensions of or originate from many rivers and tributaries that pass through this district. Some of these waterfalls even draw tourists and locals in huge number and have in fact raised tourism profile of this district. The most prominent being Duduma Waterfalls, which is one of the highest waterfalls of India.

Koraput District has huge land area. The total area of Koraput District is 8,379 km, which makes it one of the biggest districts in Odisha state. The main city of Koraput and its adjoining towns make up for nearly 30% in this total land area. Geographically, the district of Koraput is located between 18 degree and 19 degree North Latitude and 82 degree and 83 degree East Longitude. Now coming to border areas of the district, it is surrounded by Rayagada and Srikaklam District (Andhra Pradesh) in the east, Bastar District (Madhya Pradesh) in West, Nowarangpur District in North and Vijayanagaram and Visakhapatnam District (Andhra Pradesh) in South.

Around 15 to 20% of Koraput land mass area is covered by forest area. Most of these forest areas are located in deep interiors of Koraput District, which obviously implies that their presence in and around Koraput city is very minimal and moderate. These forest areas lend as much natural beauty to this region as economic livelihood to local people. Especially highly unskilled tribal population residing in the interiors of district is dependent immensely on forest industry for their livelihood. As for which are main trees and plants found in forest area, then principal species commonly found are Timber, Fire wood and Minor forest produces like Tamarind, Hill Brooms and different types of Fibres and Oil Seed. Besides, huge quantity of medical plants and shrubs are also found in Koraput’s forest areas.

Three prominent rivers pass through Koraput District. These are Machhakunda, Bansadhara and Kolab rivers. While Machhakunda and Kolab rivers are indigenous rivers of Odisha state, Bansadhara River (also known as Vamsadhara River) also flows into neighboring Andhra Pradesh state. Presence of all these prominent rivers does have positive impact on geology of Koraput region. Especially their positive impact on agricultural sector is but obvious. And all the beautiful waterfalls and streams found in this region also obviously owe their existence to these rivers.

Koraput region does have substantial reservoir of minerals. Minerals, as we all know, play a very critical role in bolstering the economy of any region. This fact equally holds true for Koraput region as well. Its huge pile of minerals has already attracted huge investments. NALCO or National Aluminium Company Limited – one of the largest producers of aluminum in the world – operates huge plant in Koraput district. Besides, a huge cement plant has been operating in the district for many decades now.

Koraput region’s geographical features, overall, makes up for engrossing detail. The famous Eastern Ghat coupled with innumerable beautiful waterfalls, couple of prominent rivers that pass through it and not to forget huge forest areas. All of these unique geographical features make this region one of the naturally beautiful and scenic places in Odisha state. In fact it would not be even wrong to say that today Koraput region is indebted to Mother Nature – not just for its scenic beauty and also economic viability.