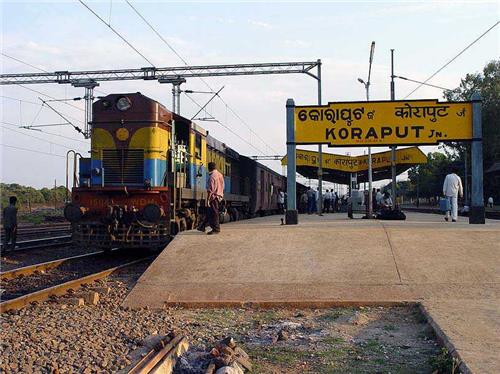 Koraput Railway Station is located in the very heart of Koraput city. For all obvious reasons it is the busiest railway station of entire Koraput District. It is directly connected to almost all the important cities of Odisha like Bhubaneswar, Cuttack, Rourkela, Sambalpur and Berhampur. . But outside Odisha, it is directly connected only to Howarh city of West Bengal and Jagdalpur of Chhattisgarh state. Today this station serves nearly 27,000 passengers every day. Few decades back though Koraput station served very less passengers, but few more railway lines were added to this station after 1998, which enabled it to directly connect to few more prominent cities of Odisha.

It goes without saying that Koraput city doesn’t have its own airport. Koraput citizens wishing to travel by air have to commute to capital city Bhubaneswar, which is home to Bhubaneswar airport or Biju Patnaik International Airport – the only serving airport in all of Odisha state. This airport was accorded status of international airport in 2013 by Government of India. As for its connectivity with domestic routes are concerned, then it is connected with all the prominent cities of India via direct and indirect flights. And now coming to how and what is the best option to travel from Koraput to Bhubaneswar. There is train as well as bus service available to travel to Bhubaneswar city. And although journey duration taken by bus as well as train is almost same, but frequencies of buses clearly outnumbers frequencies of train. There is actually just one train plying between Koraput and Bhubaneswar. Compared this with bus service, wherein there is not only more frequency but there is even choice to choose from luxury as well as non luxury bus service. Both these services are run and managed by Odisha State Government. Luxury bus service is called Odisha State Road Transport Corporation Buses or OSRTC Buses, who ply at least 8 to 10 buses from Koraput to Bhubaneswar daily basis.

Only one prominent highway passes through Koraput city. This is National Highway No 43, which passes through three states: Chhattisgarh, Odisha and Andhra Pradesh state. For Koraput city, this highway connects it to other prominent villages and towns of Koraput District. Among them important towns like Semiliguda and Jeypore is also included. Besides, it also obviously connects Koraput city to many important cities of Chhattisgarh and Andhra Pradesh state. For More Click Here

Koraput city is no different from other prominent cities of India when it comes to sole dependence on auto rickshaws for fulfilling its local transportation needs. Although city is still served by traditional cycle rickshaw pullers, but their fast dwindling numbers has paved way for complete monopoly of auto rickshaws. Besides, complete absence of other alternate services like city bus service has also given auto rickshaw competitive advantage. But all said and done about monopoly hold by auto rickshaws, their existing number is still not sufficient enough to meet demands of local commuters. This is to say that in coming years their numbers have to rise to keep in pace with city’s growing population.

The conclusion that we can draw from all the above information is that Koraput transportation services is surely headed towards right direction. With visible improvements in rail and local transportation we can say this for sure. The foundation of these two services is quite strong, which if exploited properly can not only revolutionize lives of ordinary people, but can also vitalize the local economy.